When it comes to protecting the marine environment, we make every effort to ensure that every operator working in the Canada-Nova Scotia offshore area has taken all the necessary steps to demonstrate how they will carefully and responsibly perform offshore activities to avoid or minimize impacts to the environment.

Environmental Assessments (EAs) are governed by both the Federal/Provincial Accord Acts and the Impact Assessment Act .  The nature of the proposed offshore program will dictate which regulatory stream proponents are to follow for EA preparation.

Part III of the Accord Acts promotes environmental protection in the Canada-Nova Scotia offshore area, and includes the requirement for an EA for offshore petroleum activity authorizations for exploration and development programs.

For those activities requiring an IA under the Impact Assessment Act, the CNSOPB typically accepts the IA as fulfilling its Accord Acts authorization requirement for EA.  All other EAs are primarily overseen by the CNSOPB.  This includes EAs for the following types of programs:

These processes predict effects of proposed physical activities before they begin.  The process identifies potential effects, proposes measures to mitigate adverse effects, and predicts significant adverse effects after mitigation measures and follow up programs.  Follow-up programs are common, and verify the accuracy of predictions and the effectiveness of mitigation measures specified in the EA/IA.

Strategic Environmental Assessments (SEAs) have been prepared by the CNSOPB and include an overview of the environmental information in a study area surrounding the parcel areas.  It is recommended that the information within SEAs be used by operators to assist in the preparation of project specific environmental assessments.  "The Strategic Environmental Assessment of the Middle and Eastern Scotian Slope and Sable Island Bank Areas" is particularly relevant to the Call for Bids NS22-1 parcels and is available here.

Two parcels (Parcel 5 and 8) are adjacent to the Oceans Act protected Gully Marine Protected Area (MPA).  The Gully is a critical habitat for the endangered Northern bottlenose whale and contains biodiverse habitats of deep water corals and sponges.

The five deep water parcels (Parcels 1 to 5) are located on the Scotian Slope. The Scotian Slope includes migration and transit routes for a number of whale species at risk including, but not limited to: Blue Whale, North Atlantic Right Whale and the Northern Bottlenose whale.

*The map below shows the special areas in the vicinity of the Call for Bids NS22-1 parcels. 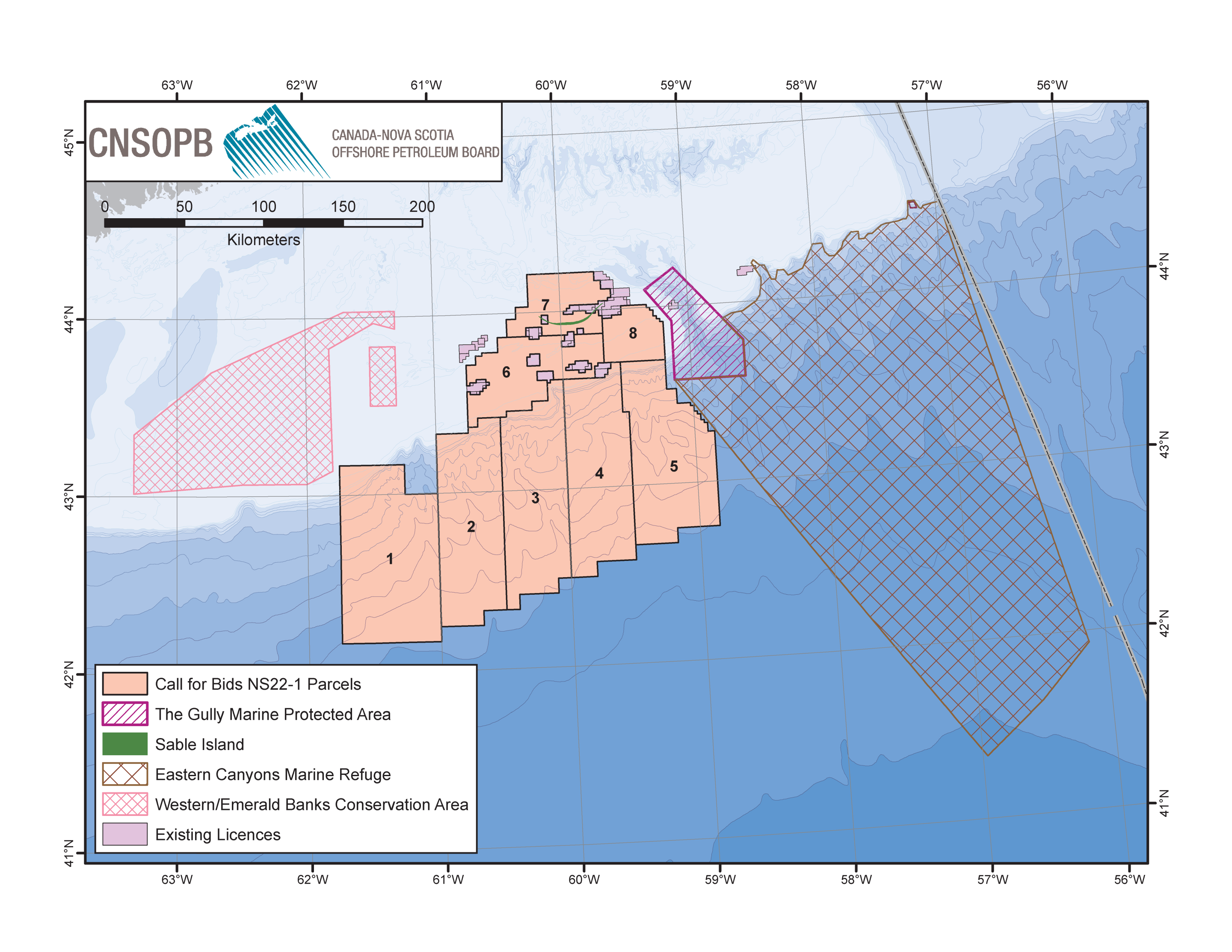 Portions of the Call for Bids NS22-1 parcels are known to have year-round or migratory presence of a number of species with protections under the SARA, which is enforced by the Department of Fisheries and Oceans Canada (DFO) and Environment and Climate Change Canada (ECCC). These include, but are not limited to: Blue Whale, North Atlantic Right Whale, Fin Whale, Leatherback Sea Turtle and the White Shark.

Project specific EAs/IAs will be required to address the potential for interaction with species at risk. Bidders are strongly encouraged to gain an understanding of the SARA.  SARA and the associated species’ registry are available by clicking here.

Indigenous and commercial fisheries occur in the area.  Most fishing is concentrated on the shallower areas of the shelf break.  Species fished include scallop, lobster, crab, cod, halibut, flatfish, haddock and hake.  There are longline fisheries for large tuna, swordfish and shark in deeper waters on the Scotian Slope and Rise.

Other ocean users in and around the parcel areas include commercial shipping, scientific research and military activity.

From 1992 to 2018, three offshore development projects operated successfully adjacent to the Sable Island National Park Reserve, and in proximity to the Gully MPA, with no significant environmental effects.

There were several environmental mitigation measures required during these operations to avoid any significant adverse environmental effects, including but not limited to:

The CNSOPB has a long-standing Memorandum of Understanding with both DFO and ECCC to ensure all environmental considerations are taken into account if potential future operators have interest in the parcel areas.